Alarm Monitoring - What is it?

A monitored alarm traditionally means a system that creates an alert to emergency services and key-holders when it is triggered. Before the 1980’s, systems used a “999 dialer” – a device which just dialled 999 and then played a looped tape message!

Modern systems which require a police response must be connected though an accredited Alarm Receiving Centre (ARC) and be registered with the police authority in advance. This is the only way that police will respond to alarm systems and has been for many years. There is no such thing as a “direct link to the police” as many people think. It’s important to be clear also that police will not respond to “bells only” systems – unless there is additional evidence of a genuine break-in, for example a neighbour reports seeing a thief climbing in a window!

If an alarm occurs, the details of the “alarm event” (burglary, fire, panic button), and with smarter systems even which sensor has activated, is sent automatically to our ARC – which of course is staffed with a full compliment of trained operators 24/365. From there the information is quickly passed to police control room and registered key-holders. Fire signals go to the fire service control room of course.

..and what are the choices?

We offer a number of systems to connect your system to our ARC. Digicom and Keyholder Alert (see below) use your existing ordinary phone line and so are inexpensive but still offer a significant upgrade over a bells-only system.

The most secure monitoring possible comes with Redcare GSM, which uses two separate “paths” to reach the ARC (a monitored landline and a GSM mobile backup path), Both of these are in regular contact with the ARC computer system, and if one fails or is disabled, the other will alert the ARC within moments. If both signal paths are compromised the ARC can alert the police.

There are also other, simpler and less expensive, twin-path monitoring systems like Redcare Secure 2 (see below). This is a real step up from single-path monitoring such as a Digicom, and represents excellnt protection for home security or a low to medium risk business.

..and finally what is meant by self-monitoring?

For those who do not feel the need for police response, our Agility 3 system links wireless camera-detectors through the Agility control system and the internet, to an app on your phone.

If your system activates, an alert and alarm images are delivered straight to your phone and anyone else you choose to nominate. So you are your own Alarm Receiving Centre!

For information on all these option see below – or just call us! 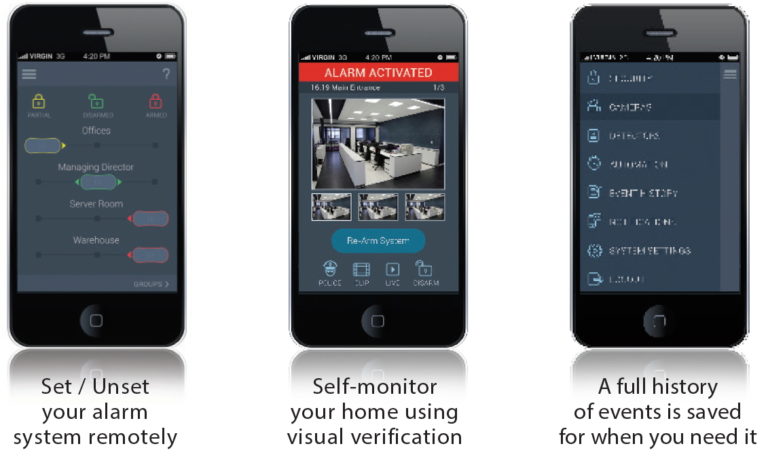 When police response is not required, our ARC operator will quickly notify you and friends or neighbours of an emergency, by landline or mobile.

A simple and inexpensive system alerts our ARC 24/7 using your regular phone line. Can send alarm signals to police or fire service and keyholders.
Read More

Self-monitor your security system from your smartphone! Agility 4 will alert you and your key-holders with images if your alarm activates .
Read More

Or just call us - its FREE

If you would like to find out which type of alarm monitoring would be best for you...

...just call our Freephone Sales Line to talk to one of our Sales Engineers. Or click below to send us a message to call you at a convenient time.
Click Here